Cheating is not much fun when everyone is watching. That why the cheaters do not like when all the people around know their faces. Much trouble and much noise. They prefer staying out of view. And that is smart of them.

But even if the cheater is suspected, his photo is in every casino surveillance room. All the security guys know that face. That is the reason the detective-security agencies are created. 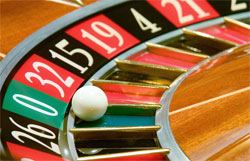 For Robert Griffin it was a security way all the time. He started his Griffin Detective Agency in 1967. Before that he was a detective in the Metropolitan Police Department. The main task of the agency was to protect the casinos from the cheaters of all kinds and also from the pickpockets and other types of thieves.

There were also the singers, actors, who were actually con artists. They would come up stage, slip and then sue the casino for carelessness. The agents were walking around and recording the behaviors and modes of operation of the suspects.

Also Griffin started the Book, where the cheaters were inscribed. There were different types of the cheaters: slots, poker, roulette, and of course the card counters. It was called Griffin's Book. And every casino wanted to buy it, so the agency made a fortune on this kind of information. And gradually almost every casino not only in the US, but also throughout the world bought this book. There were even illegal casinos on the list.

The agency's first client became Howard Hughes, one of the richest people in the world. As Hughes owned several casinos in Las Vegas, and the Desert Inn was one of them, it became kind of headquarters of the Griffin's agency.

Years passed. He divorced with his wife Beverly Griffin, who took over the agency. Gradually she ran the business into the ground. Life is life.