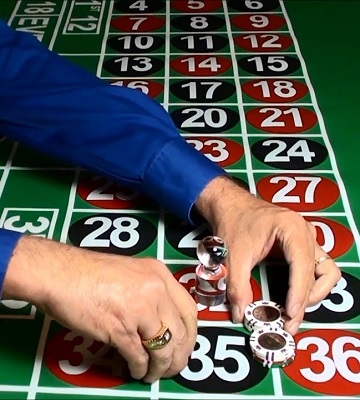 Pastposting is an interesting thing. It was not actually casino gambling scam at first. It came from horse racing. It happened when the horses galloped to the finish and the finish line tape was out of field of view.

Those were the times when the results of the races were wired by the people, who were running to the main office. And there were people who managed to learn the results and they were faster than others and made their bets on the winning numbers when the race was over.

Nowadays, it is a roulette scam, at least that is the association in the people's heads with this word. The first man, who is known for bringing this cheating scheme, was Mumbles. He noticed that the dealer was making a mistake and later corrected it, but it was enough for Mumbles to see what happened and learn the lesson.

Do you know what sandwiches look like? Well, made of chips. How about a combination made of of $1-$100-$1-$100-$1 chips? That is the mix-up stack. The "mechanic" has a stack of $1 chips and carefully replaces the mix-up one with the simple one.

The claimer, the large bettor, goes to the first section and stands there. If one of the chip stacks won, the dealer sweeps all the chips of the losers and turns back. That is when the mechanic takes the chips and the dolly and replaces the chips with others

We have 15 guests online